once again I've skipped last week progress note, as there was not much to say and I don't think it worth writing something just to write something, so in the future I'll publish a note every week when it worth it, and may skip one or 2 weeks in case of low activity or if I'm continuing a long task.

During the last 2 weeks I've been focusing on Cagou on Android. The 0.7 version is a proof of concept and give a idea of the potential, but it's not good enough to use as a daily client; I'll try to fix this for 0.8 version.

Cagou is now windowed on Android and not fullscreen by default anymore. It was initially fullscreen to gain some space, but at the end it's not a good idea as it hides many useful informations from the user. I still plan to add a fullscreen mode in some cases (when seeing photo albums for instance).

I've added Cagou to the share menu of Android, so it can now be used to share any content, be it some text data, or an image/file. That's one of the important things which was missing, and it's pretty cool to see it when sharing something on the phone.

When possible, a preview of the data is shown (works only for text or images at the moment), and then you just have to touch the name of the contact to who the file/data to. Below is screenshot of image sharing. 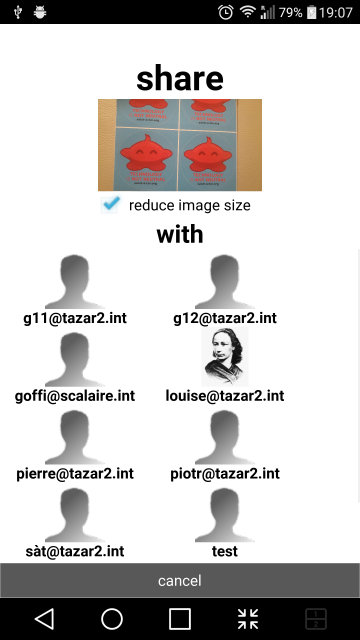 The share widget is not polished yet, it's a first draft. I've tried to keep the design simple, and the option to resize the image is only shown if the image is too big, in which case it is activated by default.
It will be possible to use the same widget on desktop, I just need to do the integration with the various APIs.

I'm now working on improving the performances for chat history. So far, all the messages were put in a BoxLayout. It's working, but it keeps all widgets in memory and this is now optimized for something which may become big like a chat history. On desktop this it is fine, but on Android it is quite noticeable that scrolling the chat history is slow.

A recent Kivy widget is usable to improve that: RecycleView. This RecycleView only calculates what is necessary to show the widgets actually displayed on the screen, this is far more efficient and we can expect a good performance boost by using that. So I've started to move the history to RecycleView, but I've run into problems for which I've created Kivy issues (#6580 and #6582). I expect that it will takes some time before those tickets are handled and fixed, I'm trying to work around those problems for now.

I have some test code but it's not fine yet. Once that done, I'll implement the loading of more history when we are at the top of the chat (either with an infinite scroll or a button).

There are a couple of other improvements that I would like to do before releasing 0.8 to make Cagou good to use on Android, but let's talk about them in a future progress note.

Last but not least, jnanar, the maintainer of SàT packages on Arch Linux, has just say that the dev versions of SàT and Cagou (the new Python 3 version) are now working (but not Libervia yet), and that tests/feebacks are welcome. Thanks to him for maintaining those packages!